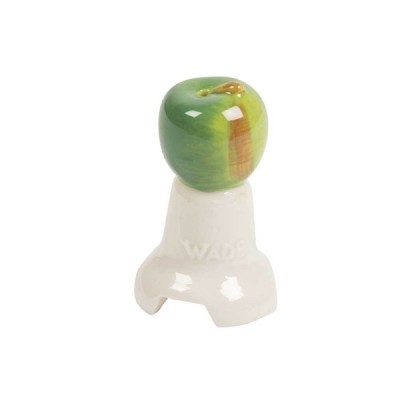 If you like baking pies, you’ll be in your element with this Milton Brook Apple Pie Funnel. Stylish and functional, this pie bird will prevent the filling from bubbling out and keep the crust crisp.

Each piece of Milton Brook bakeware has been produced using the finest porcelain and, using expert craftsmanship designed to specifically enhance the flavour and presentation of your cooking. Place the Milton Brook Apple Pie Funnel  in the middle of the pie before filling. Put the filling around the funnel, drape the crust over the top and push down until the character and steam hole is revealed. The Pie Funnel will help prevent the filling from bubbling out and will let the steam escape to keep the crust crisp.

Tracing its roots back to the early 20th century, Milton Brook products were first manufactured in the village of Milton, Staffordshire. A brook ran through the factory site, hence the name Milton Brook. Originally manufacturing porcelain products for the pharmaceutical industry, their products were acid proof, easily cleaned and stain proof. In the 21st century they produced a mortar and pestle which became a vital tool in the kitchen for preparation of all sorts of sweet and savoury recipes. Inspired by this, they designed a range of ceramic cookware for professional standard food preparing. With a range of bakeware to meet every cooks needs, each piece can be used from freezer to oven, or from microwave to table. They are essential for every cooking enthusiast – the hard part is deciding on the one which you like best!